For transparency, we are continuing to publicize the parachain vault approach we took when bidding for our Kusama and Polkadot parachains, as well as the infrastructure used in this process. For our Polkadot crowdloan, participation was capped at 25 million DOT and for our Kusama crowdloan, participation was capped at 200,000 KSM.

Our crowdloan strategy improved upon existing crowdloans by offering augmented flexibility and earning opportunities for users, such as the depositing of stablecoins and enhanced incentives for participants. These strategies are no longer being implemented to support parachain procurement, as these milestones have already been achieved. Please note that the information in italicized text below is outdated for this reason: 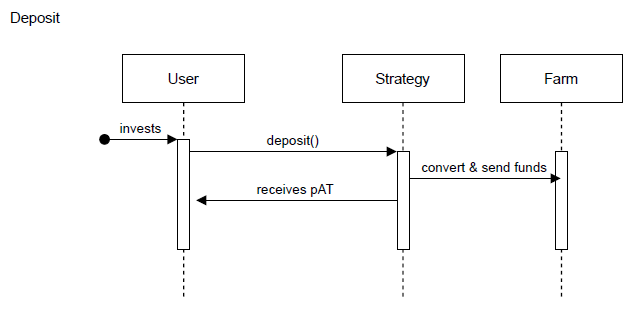 The diagram above illustrates the generic flow of all the vault strategies. The user first invests ETH or a specific stablecoin and gets back pAT. The investment is routed to specific yield farming strategies that have shown to be stable and secure.

For each one of the strategies, the detailed flow can be seen later on this page.

The above flow illustrates the generic withdrawal flow of all the strategies. The user returns either a portion of his or her pAT (or even the entire amount) and gets back the same token they entered with(either ETH or a specific stable coin) and 50% of the rewards obtained (in the same token they invested - ETH or a specific stable coin). The rest of the rewards (the other half) is sent to a treasury account, and funds from that treasury are later used to participate in the KSM/DOT auction.

At the beginning of this process, a fee is taken from each withdrawal, encouraging users to stake for a more extended period.

The above diagram illustrates the summarized flow for “deposit” action of what happens internally in the case of a Harvest strategy (ex: Harvest DAI or Harvest USDC). The average gas used by a deposit transaction for a stablecoin Harvest strategy is 409684. Strategies that we will release initially are Harvest Dai, Harvest Usdc, and Harvest Usdt.

The “withdraw” action is a bit more complex, as you can see in the diagram below: 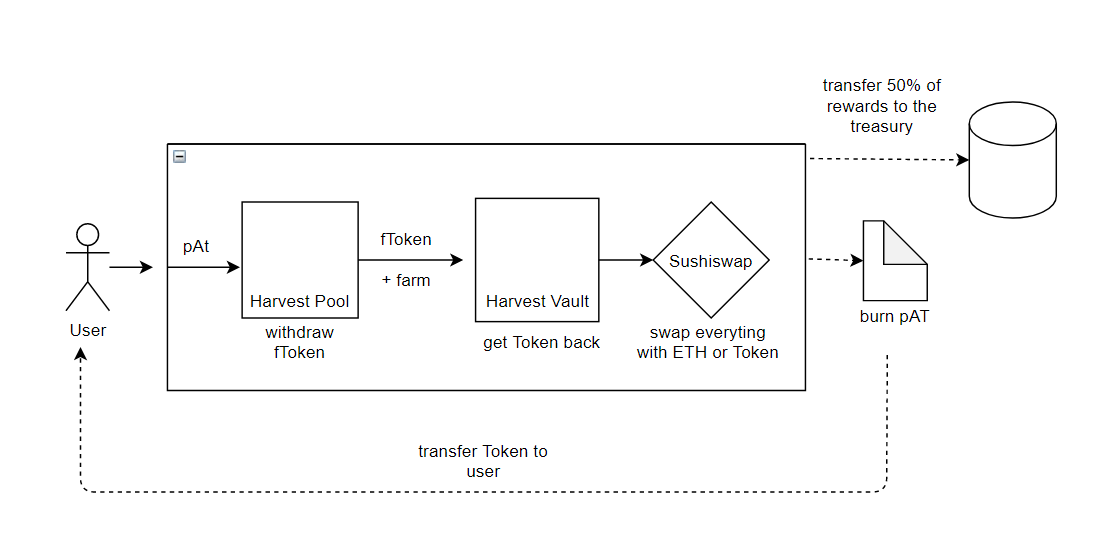 In the case of Harvest, when you withdraw from the Harvest Pool, you get back your fToken as well as Farm tokens. Also, for the same amount of fToken that you withdraw from the Harvest Vault, you might get back more Token than what you initially deposited. As an example, if you stake 100 DAI, you get back 95 fDai and after 1 year you come back with these 95 fDAI, you will probably get more than 100 DAI, as well as Farm tokens).

The difference between the amount of Token you got now and the amount you had initially, plus the Farm tokens, are considered rewards. All the rewards are then converted to ETH. 50% of that ETH amount will be routed to the treasury, and 50% is swapped with Token (Dai, in the previous example) sent to you.

The average gas used by a withdrawal transaction for a stablecoin Harvest strategy is 819300.

Let’s take the Harvest DAI strategy as an example where you enter with DAI and get the rewards later. A full deposit and withdraw flow is explained below:

Please note that Composable Tokens will be distributed after TGE to everyone who participated in the vault strategies. The APY entitled to each user depends on the total value locked (TVL) of all the strategies.

Parachain Auction Tokens (or pAT) are the receipt token minted for participation in our parachain vault strategy, representing a user’s stake in the vault. Whenever someone deposits in our vault, they get back pAT in an amount depending upon their investment and strategy type.

If we take Harvest stablecoins strategies as an example, whenever you invest Token (Dai/Usdc/Usdt), you’ll get back fToken (fDai/fUsdc/fUsdt). The value of fToken is usually a bit lower than the amount of token you invested. For example, investing $100 in DAI in the Harvest DAI strategy will get you around 95 fDai, and the amount of pAT you’ll receive is equal to the amount of fDai, which is 95 in this case.

Each strategy has its own pAT token, similar to how an AMM transfers LP tokens once you add liquidity.